Acuros® CQD®SWIR laser beam inspection cameras have been designed for use in applications requiring direct imaging of laser sources without the use of an external lens or other optical components that can impact the beam shape or path. These cameras are being adopted by laser manufacturers, producers of laser system assemblies, and laser-based manufacturing organizations. The Acuros CQD SWIR sensors are used for applications that include laser beam diagnostic imaging, laser beam profiling, and laser alignment.

The cameras utilize 2D detector arrays. This enables the measurement of divergent laser sources and the direct imaging of emitter arrays, fiber ribbon cables, and other multi-source systems.

The Acuros Laser Series Cameras are feature image sensors built with colloidal quantum dot photodiode technology. These sensors provide a broad spectral response, allowing the characterization of lasers with wavelengths in the visible, near infrared, and shortwave infrared spectral region. The sensors are designed to allow short working distances between the sensor and the laser source and to reduce interference effects that arise from the imaging of coherent light sources.

All Acuros cameras are GenICam compliant and come with USB3 or GigE Vision interfaces. For ease of export, the cameras are designated as EAR-99, requiring no license for lawful export. 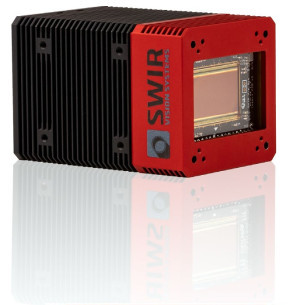 These cameras combine the benefits of the Laser imaging sensor areas with the extended responsivity from 400nm to 2000nm.